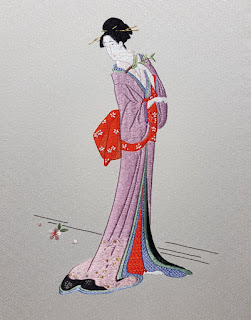 I am still writing catch up posts for the items that I finished during the last 12 months. Eternal Grace, my Japanese Embroidery phase 6 piece was finished in August last year and took about 12 months to stitch. I must admit that Grace and I were not the best of friends by the time I finished. Pretty much all her kimono is worked flat ie untwisted,  silk and it is hard to keep that amount of flat silk pristine over a long period of time. Especially when it get transported to class on a monthly bases. Being so close to the embroidery over a long period of time, it seemed like she was wearing a fur coat rather than a kimono! Looking back at Grace after a few months separation I could see the overall result and I can happily that we are friends again now. 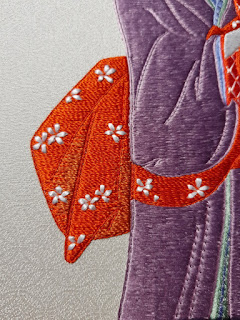 The obi was worked quite early on. Two colours of orange provide the shading for the folds However I did leave the flowers until later on because I remembered  in Bouquet form the Heart of Japan that the stitches over the knots had a tendency to slip off, which I would have found distracting. 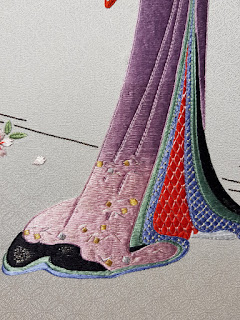 After the obi, I carried on down the kimono skirt, adding in the under kimono layers. On reflection I think I could have stitched a longer transition between the purple and pink sections on the kimono but I don't think the effect is too bad. 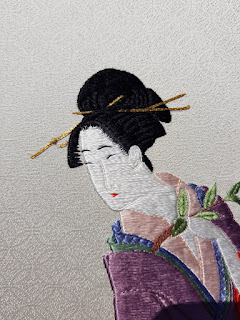 After the skirts it was back up to the face. Japanese Embroidery is always stitched foreground first, so the chin was stitched first. The neck and chest had to wait until the collar was done. Looking at this picture it is possible to see the a holding stitch at the corner of the collar. This was left in by accident and I only spotted it when Grace was framed. 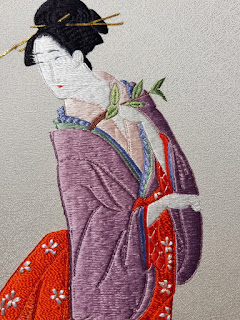 I found the hands one of the most satisfying area on Grace. I was dreading doing them because I thought it would be difficult to achieve a delicate effect. I expected to need several attempts. In the end they worked pretty much first time. 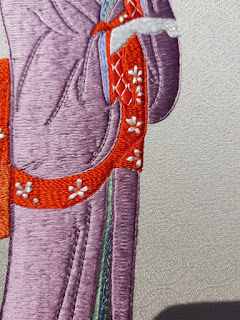 Once the kimono was finished, it was time for short stitch holding to fasten down those long flat silk stiches. This took several months to do and was challenging because the stitches show up much more on flat silk than they do on twisted silk. 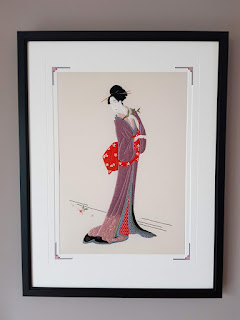 Grace has been finished so long that I have even managed to get her framed and she has been hanging on the wall for over 6 months now. For framing I go to Lynn Hall at Fringe Arts, who is a specialist textile framer. Lynn specialises in intricate mounts and the accents she used picked out the kimono colours beautifully, with a slight touch of art deco style. It was an expensive trip to the framers because I got the Butterfly Panel framed at the same time. Again Lynn did a beautiful job, with a very subtle red under mount. This was 2 years after I finished the Butterfly Panel but on reflection I am glad I waited, because the two are hung on the small wall and the 2 black frames complement each other quite nicely. 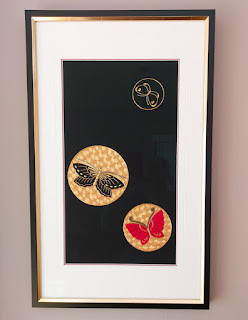 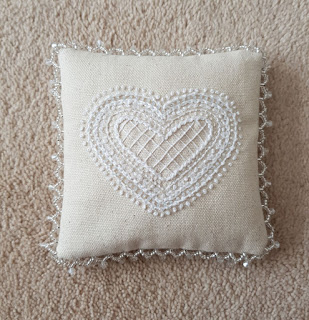 Sweet Molly's Heart is was Mountmellick workshop with Nicola Jarvis at Embroidery Now in Winchester in summer 2018. I didn't know anything about Mountmellick work before the workshop apart the fact that it is a whitework technique. As always Nicola had lots of background information for the technique and was a great teacher. 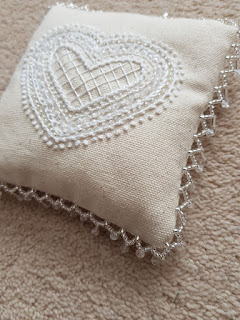 We were taught the traditional stitches in the class but  were given scope to make the design our own, including embellishments with beads and crystals. Nicola mentioned that she had seen a finished version of the design with a lattice, although that is not a typical Mountmellick technique. I liked the idea of filling in  the heart, so I gave it a go.

Finishing off the cushion gave me an opportunity to practise beaded fringes. It took several attempts to get the spacing right but in the end I was pleased with the result. 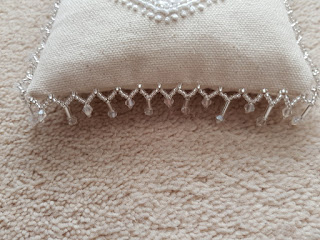 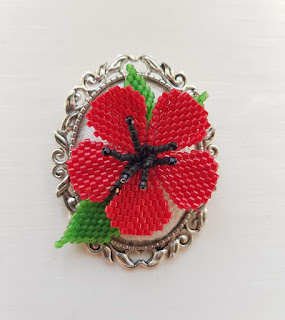 Steph, my sewing partner-in-crime, is a prolific dressmaker and blogs about the her wardrobe themes, which gives me great clues for colour choices when I make a birthday present for her. Last year her them was black, white and red.

Hazel Blomkamp's flower brooch design in Inspirations magazine issue 101 had caught my eye and I thought it might work for a poppy brooch. I simplified the design which gave a more formal effect than the original and I was quite pleased with the result. Best of all, apart from the brooch back, all the materials came from my stash. 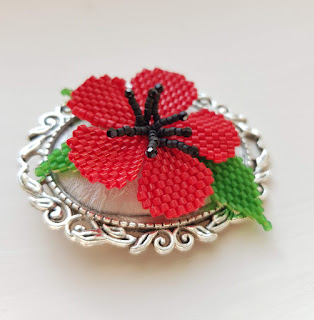 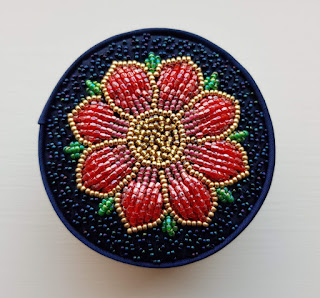 Two years ago, my friend Hazel asked me to help her try some bead embroidery for the first time. She wanted make a satin box for her mother's 80th birthday and had a month to complete it. I decided the easiest approach would be to use the Magenta Star design from Margaret Lee's bead embroidery book and to work through the design myself  at the same time.

I already had a navy blue satin box and some matching  cotton fabric. It was an easy choice to pick out ruby tri-cut and seed beads. Hazel chose to use anemone colours for her flower. They worked really well and she finished the box in good time for her mother's birthday. On the other hand, I  put the project to one side and only finished it 1 year later. Although I can tell it was early in the year because of the snow on the ground. 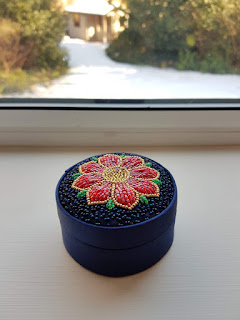 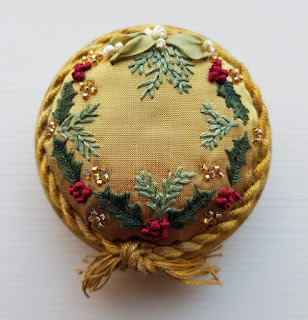 I had intended to post pictures of the Holly and Mistletoe Pincushion at Christmas but as the world is turned upside down at the moment, I thought I might as well post it now. The kit was from Lorna Bateman.  It was a fun, small kit to do and I enjoyed the combination of techniques.  I did have a couple of attempts at the fly stitch holly leaves. I found it difficult to get the angle of the stitches right and my stitches seem crowded.

It was a Christmas project and was finished in January 2019. As you can tell, I am working my way through my backlog of finished projects. You never know, I might it through to this year's completions by the time things start to get back on track. 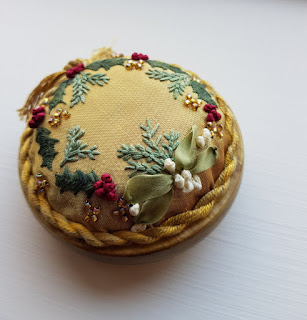 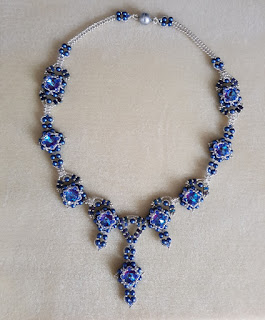 We are living in very strange times now. Watching the news feels like watching a movie. Surely this can't really be happening.  It is a very anxious time for everyone. Worry about being separated from all but the closest family and anxiety about not being able to carry on with normal life. My parents live 200 miles away. Too far for me to be able pop round and drop off anything they need. So the most I can do for them is to organise online deliveries and talk on the phone. Fortunately they are fit, healthy and have each other for company. They have a big supermarket in easy walking distance  and should be able to buy their basics now that the supermarkets are prioritising vulnerable groups early in the day.

I have often joked about wanting to hide in my cave so that I can spend more time on my hobbies and now it looks like this has come to pass. I still have work to do but losing the daily commute and quieter weekends will result in more free time. So I thought it was about time I shared my 18 month  backlog of completed projects!

The Versailles necklace was a  workshop with Sabine Lippert at Stitch 'n' Craft back in September 2018. Sabine's designs bring together a variety of bead shapes and colours resulting in opulent designs. I have made Sabine's Granada design several times already and enjoyed the construction technique. The workshop was excellent and the pattern instructions were very clear. There was lots of useful information from Sabine during the class and because we were a small group, it was a relaxing day.

My colour choices were a simple silver and blue combination because I thought this would a be useful necklace to wear with an evening dress. I have worn the completed necklace with a plain t-shirt a couple of times but I am still waiting for an evening outing. Looks like I'll be waiting a while. 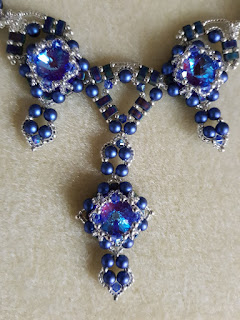 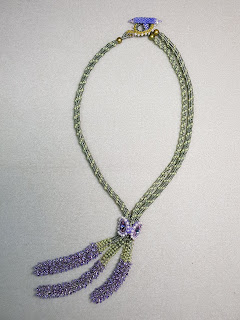 I saw the Bouquet de Lavande necklace kit at a Laura McCabe workshop in 2016. Even though I managed to restrain myself from buying it, I kept think it would suit Mum. So I finally bought it when I saw it again at the workshop with Laura one year later.

The design includes my favourite beadwork techniques, bezelled rivolis and rhythmic tubular herringbone. As usual a found a way to make the finished item unique to me. This could also be described as reading the pattern wrong and doing my own thing! In this case one of the tubular herringbone straps should have been a different shade of green but I think I got away with it. 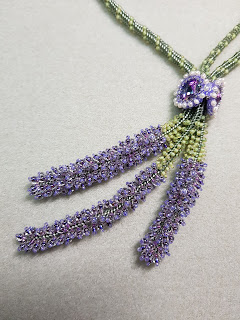 Laura warned us that the bar in the clasp could become weak so we should insert something in the peyote tube to strengthen it. I found that the filament used by 3D printers was the the perfect thickness. 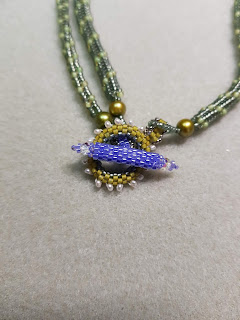 Laura's instructions are very comprehensive and her kits are beautifully presented. I still have the 2 workshop designs to finish but it's only because of lack of time. I hope to get at least one of the them finished this year. I suspect I finished Bouquet de Lavande because I had an intended recipient . I don't seem to be quite so focused when it is something for me. I am happy to say Mum was very pleased with the necklace and had not trouble finding the perfect outfit to wear with it. 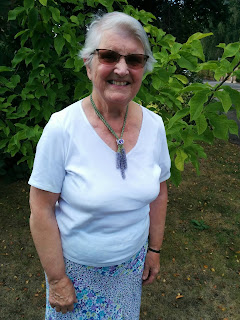